One Year Later, Filipinos Still in Crisis Under Aquino– BAYAN-USA 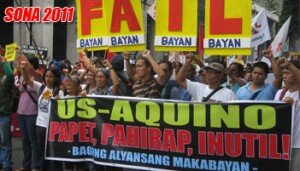 Filipino-Americans, under the banner of BAYAN-USA, are taking part in actions across the US and in Manila during the scheduled State of the Nation Address (SONA) in the Philippines to register strong condemnation and disappointment over the failure of the administration of Philippine President Benigno Simeon “P-Noy” Aquino III to facilitate significant changes to improve the lives of the burdened Filipino people after one year in office.

Citing continuing subservience to foreign dictates and a worsened economic situation as measures of the Aquino’s failure to deliver upon promises made during the election and during last year’s SONA, BAYAN-USA and its allies in the US remain adamantly unconvinced that the administration is genuinely for change.

At the heart of Aquino’s failure is unrelenting loyalty and puppetry to US foreign policy.

Within his first year, Aquino has willingly allowed the US to use the Philippines as its puppet state to take advantage of the regional territorial dispute over the Spratly Islands and provoke profit-making military aggression in Asia, and particularly against China.

As war and arms production has become the most profitable industry for the US ruling elite, the US government has in turn been able to rely strongly on the compliant Aquino administration to continue with a sugar-coated version of Arroyo’s deadly Operation Plan Bantay Laya by implementing Operation Plan Bayanihan, per the US State Department’s Counter-Insurgency Guide (US COIN). The objective of this counterinsurgency program is the same as it was for Arroyo’s administration and as utilized by repressive regimes worldwide: to suppress dissent and eliminate opposition using a combination of deceptive and increasingly violent tactics. The end result is the protection of imperialist economic and political interests at the expense of human lives.

The Poor Get Poorer Under Aquino

Under the thumb of US foreign dictates, Aquino has further pushed a neoliberal economic framework that has made life more miserable for the majority of the Filipino people. Landlord families, such as Aquino’s, remain in control of the country’s natural resources and push for privatization. Liberalization continues to hike up the prices of basic commodities such as food, gas, and water out of the reach of Filipino families. Contractualization hurts workers by decreasing wages, sowing job insecurity, and busting unions. Under Aquino, there are over 11 million unemployed Filipinos in the country with virtually zero job growth.

Privatization schemes such as the so-called Public-Private Partnership (PPP) not only serve to bulk up the pockets of wealthy and powerful multi-national corporate investors at the expense of ordinary Filipino citizens and workers.  They also widen the gap between the few Filipino families that control the majority of the country’s wealth and political power and the burdened majority who must pay from their own pockets for the risks of private investors. It is the impoverished majority who suffer the most from the Philippine state’s abandonment of its public responsibilities.

Filipinos are left with no choice but to seek opportunities abroad, like in the United States. But in these desperate economic times, many Filipino workers fall prey to human trafficking schemes to the US.

The cases of the Sentosa 27 healthworkers, the Florida 15 hotel workers, and hundreds more similar cases of Filipinos duped into coming to the US under the auspices that they would have contract work waiting for them only to have their money taken, passports confiscated, and be left by their recruiters to fend for themselves as undocumented migrants are another clear measure of the Philippine government’s failure to address the country’s economic woes.

In addition, the Aquino government continues Arroyo’s non-accountability to overseas Filipino workers in distress by not providing adequate social services and protection from abuse, maltreatment, and exploitation abroad.

Last Names Do Not a Great Leader Make

Though he was able to capitalize on his last name and the dirty record of his predecessor to win the election, it is clear that none of these things actually translated into making Aquino a great leader or any improvement to the state of the Philippine nation.

Like Obama, Aquino has proven that he is not much different than his predecessor, particularly with his human rights record. In one year of the Aquino presidency, 45 activists have been slain in politically-motivated killings, 5 have been victims of forced disappearance and over 300 political prisoners remain behind bars. The perpetrators of the 1,206 extra-judicial killings, more than 300 forced disappearances, and over 1,000 cases of torture committed under the previous administration of President Gloria Arroyo remain at-large, including those guilty of abducting and torturing renowned Filipina American poet, artist, and BAYAN USA member Melissa Roxas.

As Aquino delivers his formal State of the Nation Address (SONA) to the Philippine Congress today, Filipino-Americans will be amongst those who refused to be deceived and who understand that real change can only come from ordinary people in collective struggle, not from individual politicians with famous last names. ###

BAYAN-USA is an alliance of 14 progressive Filipino organizations in the U.S. representing youth, students, women, workers, artists, and human rights advocates. As the oldest and largest overseas chapter of Bagong Alyansang Makabayan (BAYAN-Philippines), BAYAN-USA serves as an information bureau for the national democratic movement of the Philippines and as a campaign center for anti-imperialist Filipinos in the U.S. For more information, visit www.bayanusa.org