Protesters cheered as a giant effigy of President Benigno “Noynoy” Aquino — 14 feet high, perched on a GI Joe military jeep, and shaped like a rotten “penoy,” or duck egg — was burned down during the People’s SONA to signal public dissatisfaction with the Aquino administration’s governance.

The depiction of Aquino as a rotten penoy is a commentary on the failure of his policies, which have led to a series of price hikes at the start of the year and the continuation of corruption and human rights violations, explained UGATLahi, the artist collective which created the effigy.

The top of the egg was designed to separate from the body, revealing it to contain placards condemning Aquino’s anti-people policies.

The flames leaping from the giant effigy forced protesters to back away amidst a cloud of smoke and falling ashes. But the demonstrators returned as soon as the fire burned lower, circling the burning effigy and waving the flags of their organizations: Gabriela, Bayan Muna, Anakpawis, Migrante, and League of Filipino Students, among others.

It took at least ten minutes for the effigy to burn itself out. 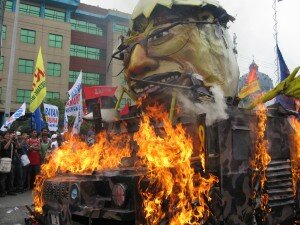 –Datu’s Tribe after their performance, on the policemen at Commonwealth Ave who had fallen asleep while manning the barricade

–Elmer Labog, chair of Kilusang Mayo Uno, on the recent death of two residents in Pangarap Village, Caloocan City after security guards of an Araneta-owned company opened fire during a demolition

People’s SONA ongoing, despite denial of permit to rally at Commonwealth

Thousands of protesters are gathered along Commonwealth Avenue, past St. Peter’s Church, launching a program for a “People’s SONA” despite the refusal this morning of the Quezon City Regional Trial Court to grant a temporary restraining order (TRO) against a ban on rallying near Batasan Road.

After the issuance by the local government of a notice advising protesters that any rally during the State of the Nation Address (SONA) could only be held at the football field in the Quezon City Hall, militant umbrella group Bagong Alyansang Makabayan (Bayan) filed a request for a TRO with the QC-RTC, asserting their legal right to “peaceably assemble and petition the government for redress of grievances.”

Though the TRO was not granted, mass demonstrators continued the march until they were halted by a police barricade past St. Peter’s Church, near the intersection of Commonwealth Ave and Batasan Road.

“This is a peaceful march and we condemn the curtailment of our rights,” said Bayan Secretary-General Renato Reyes Jr.

QC-RTC ruling judge Ma. Luisa Quijano-Padilla said in her ruling that the Court denied the TRO on the assumption that both parties had reached a concession, with the protesters and the QC local government agreeing to allow rallyists up to St. Peter’s Church.

No such agreement was reached, according to Bayan officials, who slammed the court order.

“The court did not actually rule on the merits of the case filed by Bayan, assuming that the two parties had reached an agreement already. We had not. For the record, while Bayan was open to compromise, the city officials, even at the last minute, did not want to give in and allow the protest [near Batasan Road],” Reyes said.

Still, “while it is unfortunate that the TRO was not granted, in reality we have been able to march beyond the original restrictions imposed by the police,” Reyes added.

The program of the People’s SONA is ongoing, with performances by progressive music artists and speakers from various militant organizations, including Kilusang Mayo Uno and Kilusang Magbubukid ng Pilipinas (KMP), among others.

Several hundred farmers under the banner of KMP, many of them from the Cojuangco-owned Hacienda Luisita, were the first to arrive at Commonwealth Ave this morning, to launch the day-long protest against President Benigno “Noynoy” Aquino III. #

Visit this page on July 25 for live updates on the SONA protests.

English Powerpoint on the State of the Nation 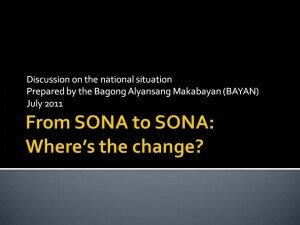