State of the Wang-Wang Address fails to address peoples issues 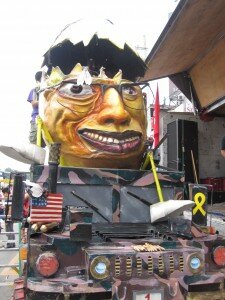 The umbrella group Bagong Alyansang Makabayan today said that the President Benigno Aquino III’s second State of the Nation Address was “underwhelming in its litany of so-called achievements, and disturbing in its glaring omissions”. The group described the speech as more of a “state of the wang-wang address than an honest appraisal of the problems besetting the nation.”

Bayan said that the picture of the economy depicted by Aquino was very far from the reality faced by ordinary Filipinos. “An increase in the stock market index or an improvement in the credit ratings is not something that translates to any benefits for the poor. These are indicators from the point of view of big business and the banks, not from the people,” said Bayan secretary general Renato M. Reyes, Jr.

“The speech ended without any mention of how government will generate new jobs, increase wages, create housing for the poor, implement land reform or even assuage the impact of price increases. It is still the same ‘pantawid’ programs that will be implemented,” he added.

Bayan said that Aquino’s claim that Filipinos can now choose between domestic and foreign jobs is “patently untrue”.

“His claim that Pinoys can now choose between jobs here or abroad because of improved employment opportunities has no basis in fact. More than a million Filipinos leave country each year to look for work abroad. Overseas deployment of Filipino workers in 2010 reached 1.47 million, still higher than the 2009 figure of 1.42 million,” Reyes said.

Citing the study of Ibon Databank and the Bureau of Agricultural Statistics, Bayan said that the so-called increase in rice output cannot be attributed to the national government since the gains were due mainly to improved weather and an increase in the hectarage of land that was used for rice farming.

Bayan observed that Aquino seemed to talk tough when it came to the issue of sovereignty, particularly the Spratlys dispute. However, the group said that Aquino was silent on sovereignty issues in relation to the United States, especially involving foreign troops.

“It seems the President can talk tough against China because he has the backing of the US. However, we’ve yet to see Mr. Aquino stand up for national sovereignty in relation to the Visiting Forces Agreement and the permanent presence of US troops in our country. That’s a violation of our sovereignty as well,” Reyes said.

The group also questioned the claim that the AFP will be modernized with the addition of a new Hamilton Class Cutter from the US Navy. “The boat Mr. Aquino was referring to is a Vietnam War-era boat commissioned in 1967 and decommissioned in March 2011 by the US Coast Guard,” Reyes said.

During his presidential campaign, Aquino promised a review of the VFA, particularly provisions on custody of erring US troops. No review results have been released.

While Aquino did certify as urgent the compensation bill for Marcos victims, Bayan noted that he only had a passing mention of human rights issues.

“The Commander-in-Chief of the AFP is leaving it to the Department of Justice to solve the problems of extrajudicial killings. It means that the president is not really interested to take on human rights issues such as the enforced disappearances of Jonas Burgos, Sherlyn Cadapan and Karen Empeno, or the plight of the more than 300 political prisoners still languishing in jail, or the rising numbers of victims of extrajudicial killings under his watch,” Reyes said.

“It is irresponsible, insensitive and wrong to let these issues just fall on the desk of DOJ Secretary de Lima, especially when the situation demands a strong response from the president himself. It is clear Mr. Aquino does not have a human rights platform, thus he is passing on the problem to his subordinates,’ he added. ###