Filipino-Americans across the US, under the banner of BAYAN USA, and their supporters condemn the last minute moves by President Barack Obama to railroad the signing of the National Defense Authorization Act (NDAA) on New Year’s Eve 2011. In one fell swoop, the White House has not only played a key role in the intensification of political repression in the United States and worldwide, it has ruthlessly exposed its true character of being first and foremost a loyal representative of the ruling 1%.

The worsening of the protracted global economic malaise continues as monopoly capitalism’s crisis of overproduction has spawned the crisis of public debt through its scheme of neoliberalism. While neoliberalism, under the guise of “free market capitalism”, has long-forced semi-colonies such as the Philippines and other parts of Asia, Africa, and Latin America into chronic debt and abject poverty, it has now erupted mercilessly against working people in advanced capitalist countries such as the US, Canada, and the members of the European Union. Neoliberalism’s financialization of capital has produced an acute debt crisis in the US that has ushered in record-breaking unemployment, under-employment, housing foreclosures, lack of access to food, health care, education, and other social services for working people in order to pay off a debt not of their own making.

Threatened by the upswing of class rage and social unrest over intolerable structural economic and political inequities, as recently exemplified by the resilience of the Occupy Movement, the ruling 1% believes that the authorization of the US military to conduct warrantless arrests and indefinitely detain anyone—including US citizens—on US soil or anywhere in the world under the guise of national security will somehow quell growing dissent in the US and internationally by invoking fear. However, history has continuously proven that oppressed peoples readily shed their fear, even in the midst of the state’s repressive apparatus, to fight for the basic right to livelihood and dignity amidst a crisis created by monopoly capitalism, or the over-concentration of the world’s wealth in the hands of a minority elite determined to maintain its hegemonic control.

Amidst human suffering, the ruling financial oligarchy continues to tow the lie that it can recover from the crisis by siphoning trillions in public funds to bail out big banks and financial firms to stimulate economic growth, thereby justifying back-breaking budget cuts and austerity measures on working families. In order to seize control of overseas markets and cheap raw materials, the ruling 1% must act through its lackeys in Washington to beef up its military industrial complex by throwing in more public funds to wage endless overt wars of aggression, proxy wars, covert counter-insurgency operations, militarization, and other forms of intervention abroad. In fact, the NDAA was signed as part of a defense spending bill that would allocate over $600 billion more in US tax dollars towards the country’s war machine, now granting it unlimited powers to act domestically. This includes targeting US activists who express solidarity for national liberation struggles abroad against US intervention, as well as support for governments asserting national sovereignty.

The Filipino people got a taste of abusive expansion of military powers, warrantless arrests, and indefinite detentions during the period of martial law under the former dictatorship of US puppet Ferdinand Marcos. But not even martial law, including the illegal detention and torture of thousands of dissidents throughout the Philippines, could stop a growing and fearless peoples movement for democracy and human rights that was decisive in ousting the Marcos dictatorship, reviving civil liberties, and opening democratic space in the country. It was through the people’s fight against US-directed fascist dictatorship in the Philippines that BAYAN Philippines was born in 1985.

It is expected that the minority of monopoly capitalists, in order to survive the very crisis it created and prolong its inevitable demise, will consolidate itself to concoct schemes of political repression to subdue peoples resistance. But this tiny and fragmented front of monopoly capitalists is no match for the broadening united front of oppressed peoples around the world engaged in class struggle for a better alternative. The NDAA and all other forms of repressive legislation will not succeed in quelling the righteousness of dissent for as the long as the global crisis continues . BAYAN USA proudly links arms with working people in the US to build a movement through education, organization, and mobilization that will defeat the NDAA and all other assaults on democracy, human rights, and civil liberties. ### 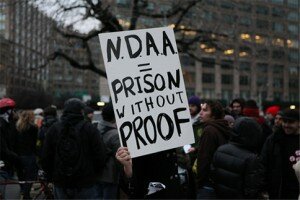