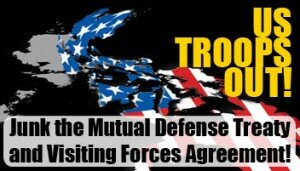 The Bagong Alyansang Makabayan (Bayan) today expressed alarm over a Washington Post article publisehd on January 26 which revealed that negotiations are underway between Manila and Washington on the increased presence and access of US troops in the Philippines. The article entitled “Philippines may allow greater U.S. military presence in reaction to China’s rise” was written by Craig Whitlock and appears on the following link .

“Although negotiations are in the early stages, officials from both governments said they are favorably inclined toward a deal. They are scheduled to intensify the discussions Thursday and Friday in Washington before higher-level meetings in March. If an arrangement is reached, it would follow other recent agreements to base thousands of U.S. Marines in northern Australia and to station Navy warships in Singapore,” the article said.

“Among the options under consideration are operating Navy ships from the Philippines, deploying troops on a rotational basis and staging more frequent joint exercises. Under each scenario, U.S. forces would effectively be guests at existing foreign bases,” it added.

“Philippine officials said they favor allowing the United States to deploy more troops or ships, as long as they rotate periodically or are considered temporary. Neither Philippine nor Obama administration officials would rule out a return by U.S. ships or forces to Subic Bay,” the article said.

A senior PH official was quoted as saying that the Philippine is not alone in embracing more US military presence saying that “Nobody wants to have to face China or confront China.”

The article also reveals that both the US and PH governments are sensitive that the moves may be construed as the return of Cold War-era US bases. The Philippine official said that it hopes to meet the objective of increased US military presence sans “political friction”.

Two decades ago, the PH senate booted out the US bases from the Philippines. There is a constitutional ban on foreign bases sans any treaty ratified by both countries. US troops however are able to stay in the Philippines under the very vague Visiting Forces Agreement. Bayan has protested the decade-long deployment and basing of US troops in Mindanao.

Bayan secretary general Renato M. Reyes, Jr. said that the Washington Post article confirms the group’s fears of increased US troop presence and return of virtual US bases in the country. The group warned of this after the US revealed its new defense strategy last January 3. He said that the Aquino government will be answerable to the people and to Congress should it enter into a “virtual basing agreement” with the US.

“The revelation comes in the wake of recent high profile visits to the Philippines by US Secretary of State Hillary Clinton and senators John McCain and Joe Lieberman of the powerful US Armed Services Committee. The question now is: Does the Aquino government plan to keep these negotiations secret? Will we be simply surpirsed that US troops are returning en masse to the country and reclaiming Subic?” Reyes said.

“With the new US defense strategy in place, and with the mendicant and pliant PH foreign policy carried over from the Arroyo regime, there will be more US troops in our country, in violation of our national sovereignty. We should not allow our country to be a military outpost of the US for the latter’s hegemonic interests. The Aquino government must say NO to more US troops and demand the pull-out of the US forces based in Mindanao for about a decade now,” he added.

Bayan called on the Philippine Senate to probe DFA officials on the status of the negotiations. The Senate has oversight on the implementation of the VFA.

“Clearly the PH and US officials involved in the negotiations aim to circumvent the constitution by making it appear that the US troops are here on a rotational and temporary basis, quite similar to what they are doing in Mindanao. We believe that is still virtual basing that violates the constituion and our national sovereignty. The US troops in Mindanao have been here for a decade yet the US and PH governments still consider them ‘visitors’ deployed on a ‘temporary’ basis,” Reyes said.

“On the question of China, having US troops surround the Philippines is not an assurance of peace in the region. Quite the contrary, it will only serve to provoke China and increase tensions in the region,” he added.