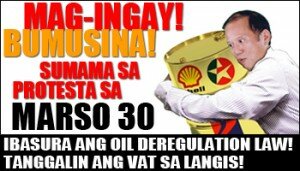 The recently launched Coalition Against Oil Price Increase (CAOPI) will spearhead a noise barrage tomorrow March 30 against high oil prices. The protest action will be between 5-7pm in areas as Edsa cor West Avenue, Edsa cor Quezon Avenue, Edsa Cubao, Monumento in Caloocan, Philcoa in Quezon City and other parts of Metro Manila.

The group is calling on motorists and commuters to join the noise-making as a sign of protest against government inaction against the high oil prices.

Petroleum prices are expected to go up again next week according to the Department of Energy.

“There are many proposals for brining down oil prices, including the removal of the VAT on oil and the repeal of the oil deregulation law. There is an alternative to deregulation and that invovles regulation and nationalizing the oil industry,” said co-convenor and UP professor Danilo Arao.

Umbrella group Bagong Alyansang Makabayan said that the oil companies and the Aquino government were provoking the people’s anger with the projected increase next week.

“It’s Holy Week and many will be travelling to the provinces. They will surely feel the burden of high oil prices. Even plane fares have gone up. And when they return from the provinces, it’s possible oil prices would have gone up again,” said Bayan secretary general Renato M. Reyes, Jr.

CAOPI has called for the removal, suspension or reduction of the Value Added Tax on oil products, the repeal of the oil deregulation law, the regulation of prices in the wake of overpricing allegations, and the nationalization of the oil industry.

Its convenors support any or all of the proposed measures that are aimed to bring down oil prices.

The 28th Balikatan exercises ended with the “usual thank yous”, said an Inquirer report. “As t [...]

Silverio Compound: A fight for the right to live

(Video by Tudla Productions) The Silverio Compound demolition in Parañaque City was the most brutal [...]