On the Independent Oil Price Review Committee by CAOPI 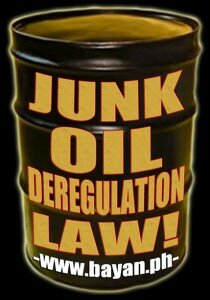 by the Coalition Against Oil Price Increase (CAOPI)

Our position is that Republic Act (RA) 8479 or the Oil Deregulation Law (ODL) has not dismantled the monopoly position of the traditional Big Three oil companies (namely, Petron Corporation, Pilipinas Shell, and Chevron Philippines). Consequently, the ODL did not result in competitive prices. On the contrary, industry data would show that the Big Three has maintained their dominant position while oil prices have soared tremendously amid persistent allegations of overpricing.

The failure of ODL to foster real competition and make local prices more competitive stems from the wrong assumption of its proponents that there is free competition in the global oil industry. They erroneously presupposed that this global free competition will be translated immediately and fully to the domestic downstream oil industry. But nothing can be further from the truth. Our research shows that the global oil industry continues to be monopolized by giant American and European companies that have historically controlled the industry. The advent of speculation in the futures market of commodities, including crude oil, has further made oil prices volatile and outrageously high. We estimate that monopoly pricing and speculation account for as much as 75% of the spot price of Dubai crude. What the ODL did is to immediately and fully pass on to Filipino consumers this bloated global price of oil.

Petron, Shell, and Chevron have continued to act as the local agents of the global oil monopoly in the Philippines. Shell (UK/Netherlands) and Chevron (US) are the local units of two of the biggest oil companies in the world that own not only pump stations but entire networks of production and distribution infrastructure worldwide. Petron, while currently majority owned by San Miguel Corp. (SMC), have maintained its historical ties with Big Oil through production and distribution contracts. Of course, the ODL did allow the entry of new players but the largest among them are also local units of big foreign oil firms like Total Philippines (France) and Liquigaz (Netherlands).

Because the increases are automatic under the Oil Deregulation Law, the excessive and oppressive global prices are fully imposed on the people. Worse, the public has no way of knowing how prices are exacty determined or how factors like global oil prices and the foreign exchange rate impact domestic prices. The people are forced to accept whatever explanation the oil firms and the DOE give for the price increases. This setup has paved the way for further abuses by the local oil companies at the expense of the people. One way is by implementing higher price hikes or lower rollbacks relative to global prices and the foreign exchange, or what is called as local overpricing. Estimates from different methodologies vary, ranging from P8 per liter to as much as P16 per liter for the entire duration the deregulation law was in effect. What is certain is that domestic price movements are steeper than global price movements.

If the panel is to make a substantial, meaningful and credible review of the ODL and the pricing practices of the oil companies, it should take a very close look at the type and terms of contracts of the local oil firms with their suppliers, especially those that are local units or partners of the world’s biggest oil companies. This will help determine whether the prices that they implement are justified by movements in global oil prices and production costs. The panel must also examine and publicly disclose how the oil companies actually compute their prices, the components of their pump price, how they determine their prices in various locations, and other aspects of their pricing behavior. Another important issue is the extent of so-called “free competition”. The panel must closely study how the small, Filipino-owned firms compete against the Big Three and the relatively new but globally established oil players – Where do small players get their oil supply? How do they counteract the sheer dominance of the big players which overwhelmingly outnumber their pump stations, who own the country’s only refineries and key infrastructure such as terminal and depots, among others?

The review process undertaken by the IRC should practice full public transparency by allowing observers to examine every phase of the review.

In the fabled Land of Yellow where the President lays claim to the democratic mantle by b [...]

The Philippine Air Force (PAF) has denied that it used US-satellite guided missiles or smart bombs i [...]