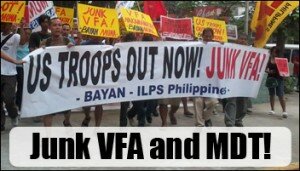 The umbrella group Bagong Alyansang Makabayan today slammed the Aquino government for overreacting to the planned rocket launch of North Korea, saying that the Philippine government has uncritically joined the US in hyping the so-called nuclear threat

posed by the rocket launch.

“OA doesn’t even begin to describe it. While safety precautions against rocket debris are ok, the reaction of the Philippine government is more in line with the hype being stirred by the US in relation to so-called ballistic missile tests that the North Koreans are allegedly undertaking. The US is trying to deny North Korea’s sovereign right to launch a satellite for peaceful use by hypocritically using the specter of nuclear weapons,” said Bayan secretary general Renato M. Reyes, Jr.

“Fact of the matter is, North Korea has said over and over again that the rocket launch is for peaceful scientific use. It has even invited foreign journalists and observers to witness the launch and scrutinize the rocket,” he added.

Bayan said that the US remains the world biggest nuclear threat since it possesses some 5,100 nuclear warheads strategically placed all over the world in submarines and military bases. In contrast, North Korea has suspended its nuclear weapons test and uranium enrichment program and allowed international inspectors to monitor activities at its main nuclear complex.

“The nuke bogey is just the latest US ploy to justify sanctions and military intervention against North Korea. It’s the US which has long been threatening North Korea. Meanwhile, North Korea does not pose a threat to the Philippines or any nation in Asia for that matter. North Korea has always aspired for peaceful reunification with South Korea and for the complete denuclearization of the Korean peninsula,” Reyes said.

“The US on the other hand has always sought to establish its military presence everywhere in the world, acting as some kind of global police. It is now seeking to expand its permanent military presence in the Philippines,” he added.

Bayan said that the hype surrounding the North Korean rocket launch also serves to justify continued US military presence in the Philippines.  The PH government has reportedly sought US assistance in monitoring the launch. A US military exercise has earlier been set on April 16.

“The Philippine government is not at all concerned with the possibility that more nuclear-armed US warships are making port calls in the Philippines,” he added.

Based on a declassified document from the independent non-governmental organization National Security Archive based in the George Washington University, the US government had secretly stored nuclear weapons in the Philippines, during the time of the Marcos dictatorship.

The memo said that “divulgence of the fact that nuclear weapons are stored in the Philippines, and have been there for many years without prior consultation with the Philippine government, would greatly jeopardize US-Philippine relations, particularly on the eve of presidential elections scheduled on October 11 (1969).”###