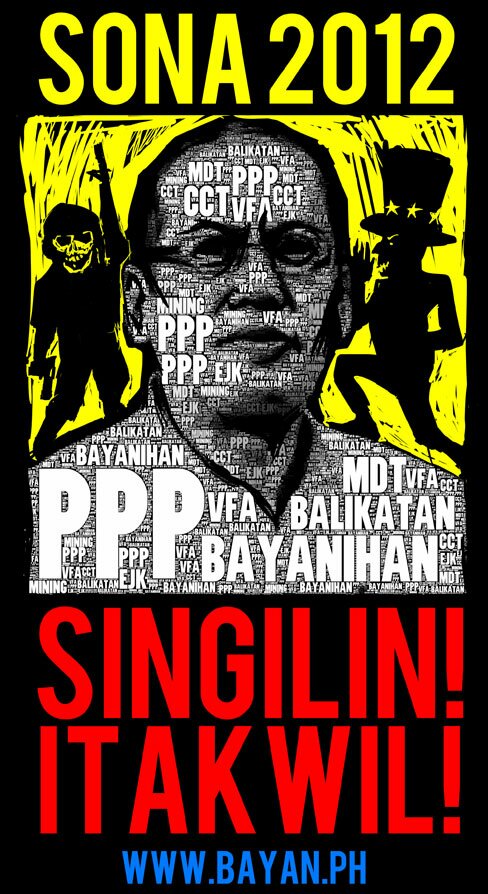 The umbrella group Bagong Alyansang Makabayan today filed its application for a rally permit before the Quezon City government for the annual State of the Nation Address of the President. The application stated that Bayan and its allied groups are seeking a permit to hold the rally at the Batasan Road, near Congress.

The application for a new rally permit comes a year after a case was filed before the Quezon City Regional Trial Court after the city government denied then modified Bayan’s application without hearing and without stating the reasons for the denial and modification. The case was elevated to the Supreme Court and is up for decision. Respondents in the pending case include Mayor Herbert Bautista and officials, QC official and former police general Elmo San Diego and other current officials of the Philippine National Police.

Below is the letter filed by Bayan and received by the Office of the Chief of Staff of the Mayor.

The Bagong Alyansang Makabayan, an umbrella organization of various sectors and progressive groups, will hold its annual State of the Nation Address (SONA) rally on July 23, from 7am to 6pm. The event is an occasion for the people to air their grievances to government.

Consistent with our constitutional rights, we ask the City Government of Quezon City to issue the necessary permit for the July 23 rally along Batasan Road, near the Batasang Pambansa, from 7am to 6pm. The event will be using a mobile sound system and will have at least 10,000 participants.

We believe that the people have the right to present their grievances as close as possible to the institution that they are addressing their demands to. Moreover, Batasan road is a wide enough highway to accommodate the protesters. This will also decongest the main road that is Commonwealth Avenue, which is the usual site of the SONA rally. The time that was set forth in this action includes the time to set up the equipment, stage and sound system which are essential to the mass action.

Should the City Government deny or modify this application for a permit, we would like to call its attention to the guidelines set forth in Batas Pambansa 880 and in recent Supreme Court decisions on the issuance of rally permits.

(c) If the mayor is of the view that there is imminent and grave danger of a substantive evil warranting the denial or modification of the permit, he shall immediately inform the applicant who must be heard on the matter.

(d) The action on the permit shall be in writing and served on the application [sic] within twenty-four hours.

The Supreme Court meanwhile in its decision in Integrated Bar of the Philippines (IBP) vs. Manila Mayor Lito Atienza (G.R. No. 175241 ), the High Court said that the mayor committed grave abuse of discretion when he modified the permit without informing the applicant and without showing proof that the protest action presented clear and present danger to the public.

We cite these important provisions and rulings to avoid any situation wherein the City Government, particularly the Department of Public Order and Safety, will arbitrarily modify or deny a permit without stating the bases thereof. Such will be a clear violation of the law. We believe that such has been the practice of the DPOS in previous SONA rallies. Such modification cannot and should not be allowed to continue. The City Government must show proof that a particular rally poses clear and present danger to the public before it can deny or modify a permit.

We would like to remind the City Government that this arbitrary denial of our application for permit, without hearing and without stating any valid reason for the denial or modification, was the subject of a court case last year and is now being reviewed by the Supreme Court.

We would also like to reiterate to the City Government that based on BP 880, the approving authority must act on the application within two days from filing, or the permit will be deemed granted.

We hope that the City Government will act favorably on this application and uphold the applicant’s right to peaceably assemble.