Expose and oppose the deception of the US-Aquino regime 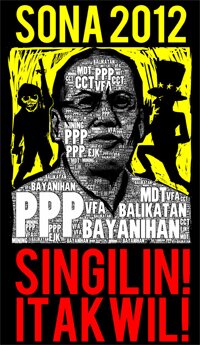 Two years into the Aquino presidency and what we have witnessed so far is the continued mass deception of the so-called “daang matuwid” and the false claims of inclusive growth in the economy. We expect Aquino to once again harp on these themes in his SONA today. But such trickery has long been exposed by the continuing worsening of unemployment, poverty and hunger among our people, along with Aquino’s failure to decisively prosecute Mrs. Gloria Arroyo and her cohorts for their many crimes, including plunder, poll sabotage and human rights violations.

Instead of the hype of good governance and economic growth, what we have seen in the first two years of the Aquino presidency is the perpetuation of anti-poor and anti-development programs like the public-private partnership (PPP). This is simply the same privatization program long imposed on the country by imperialist institutions led by the International Monetary Fund (IMF), World Bank and Asian Development Bank (ADB). Through the PPP, Aquino’s relatives like Danding Cojuangco and the richest oligarchs such as Sy, Razon, Tan, Ang, Ayala and Pangilinan and others have become ever more aggressive in expanding their business empires, taking over not only infrastructures and utilities but even basic social services like education, health and housing. These are the same families that collude with foreign firms in wantonly plundering our natural resources for exports, including minerals and energy resources. By bagging PPP contracts and deals in the extractive industries, among others, these super-rich families and their foreign partners are accumulating unimaginable wealth, at the great expense of the people, industrialization and the environment.

Indeed, Aquino’s supposed campaign against bureaucratic corruption is actually more about instituting reforms to make a better environment for big private foreign and local businesses operating in the country. It is less about going after big-time plunderers like Arroyo. although Aquino and his Liberal Party (LP) have expediently used Arroyo as scapegoat for the regime’s failures, including its failure to address the people’s needs. We expect Aquino to make a big deal of his drive for accountability via the Corona impeachment, despite the obvious fact that his government has not gone all-out in making accountable Arroyo and the rights violators of her regime.

Part of Aquino’s deceptive tactics is the provision of the conditional cash transfer (CCT) for selected poorest households. Since taking over, Aquino has massively scaled up the scope and budget of the foreign debt-funded CCT program, which Arroyo first introduced. But the beneficial impact of the program is easily disputed by the worsening condition of the poor, the continued lack of access to social services, rising prices and unemployment. Thus, despite all the deception, social unrest persists.

Despite the absence of a true opposition from traditional political parties, the legitimacy of the Aquino administration continues to be challenged by the people, by those who are being impoverished and excluded by government and its policies. But Aquino answers them with repression, very much like the fascist Arroyo administration. Aquino’s Oplan Bayanihan– which claims to uphold development and human rights– has given rise extrajudicial killings, abductions, illegal arrests and detention, militarization and other forms of state-sponsored human rights abuses remain.

Finally, still in the name of further strengthening and consolidating its control over political power, Aquino has displayed unabashed puppetry to US imperialism. Consistent with its deceptive nature, Aquino has used the tension with China to justify the ever increasing military presence and intervention of the US in the Philippines. In the process, the US-Aquino regime is not only undermining the country’s national sovereignty but is also exposing the people to the dangers of US military presence, including human rights violations, prostitution and the violation of the Constitutional ban on nuclear weapons.

Aquino should realize really soon that his gross deception will not last forever. The people are beginning to see clearly what this regime really stands for. The people will have to place their hopes for change in their own collective struggle.###