Palace, DFA pressed to tell truth regarding US drone strikes in PH 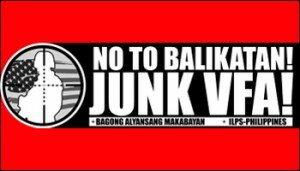 The umbrella group Bagong Alyansang Makabayan today called on the Philippine government to disclose the whole truth behind reports appearing in the New York Times that the US military conducted a drone strike in the Philippines in 2006. The group said that this violates Philippine sovereignty and is proof that the US is engaging in direct combat action in the country. The news came amid reports that the PH government is seeking the help of US spy planes in the South China Sea dispute.

In the article The Drone Zone appearing July 6, 2012 in the New York Times, Mark Mazzetti interviews drone operators based in the United States.

“According to three current and former intelligence officials I spoke to, in 2006, a barrage of Hellfire missiles from a Predator hit a suspected militant camp in the jungles of the Philippines, in an attempt to kill the Indonesian terrorist Umar Patek. The strike, which was reported at the time as a “Philippine military operation,” missed Patek but killed others at the camp,” Mazzetti wrote.

There had been reports in September 14, 2006 that an airstrike reportedly killed Indonesia terrorist Umar Patek, but this was eventually revealed as false. Patek has recently been convicted by an Indonesian court for 20 years for his role in the Bali Bombings.

“While the PH government must deal decisively with suspected terrorists, it is unacceptable to allow a foreign power to conduct combat operations in our country. This makes us no different from Pakistan, Afghanistan and Iraq. This places Filipinos at risk. Just remember the countless civilians that have died in Pakistan and Afghanistan because of these drone strikes conducted by the US,” Reyes said.

The report of US drone strikes in the Philippines comes a week just after Philippine president Aquino announced that his government may seek overflights by US spy planes in the South China Sea, drawing criticism again for allowing intervention in domestic affairs.

Earlier in February this year, it was also reported that the US may have launched another drone strike in Sulu in Mindanao which killed suspected terrorist leaders. The US and PH governments later revealed that the airstrike was allegedly  caused by a “smartbomb” from the US which was allegedly dropped by PH planes.

According to the New York Times article, the US Joint Special Operations Command runs part of the US drone program, having its own target list. The US JSOC operates in the

Philippines through the Joint Special Operations Task Force-Philippines based in Zamboanga in Mindanao. The US claims that the JSOTFP does not engage in direct combact and merely provides training for PH troops. The US special forces in the JSOTFP have been based in the Philippines for more than 10 years now.

“US military presence in the Philippines has resulted in direct military intervention by a foreign power in our domestic affairs. It’s obvious they have violated our laws and our sovereignty, yet the PH government does not seem to care. The Aquino government seems more concerned with the second-hand military hardware and military aid we are set to receive,” Reyes said. ###